List of potentially dubious Armani fake stores for Armani jeans, shirts and watches, as well as tips on how to safely shop for Armani fashion online.

After Georgio Armani dropped out of medical school and worked as a window dresser, among other things, he and his partner Sergio Galeotti founded the fashion label named after him in 1974. Initially, the company offered only men's fashion. In 1975, the first women's collection was finally launched. Several brands are managed under the name of the fashion designer: From the original brand "Georgio Armani" to the haute couture fashion "Armani Privé" to the slightly cheaper collection of "Emporio Armani". With its different brands, the Italian company is broadly positioned. The fashion label also has several collections for babies, children and teenagers on the market. Georgio Armani is especially known for his fancy designs in his fashion. In addition to clothing, the fashion group also offers accessories such as belts and sunglasses, as well as bags. But also a hotel chain as well as a beauty line are managed under the name Armani. Georgio Armani is thus considered one of the most important and successful fashion designers of the 20th century.

Armani is a very exclusive fashion brand and is therefore particularly often counterfeited by product pirates. The fakes are mainly offered on the Internet. If you search for "Armani Outlet" or "Armani Sale" on Google, you will often be directed to professionally made Armani online stores of product counterfeiters, who sell Armani plagiarisms from China or Asia there. These Armani fake stores are hard to distinguish from legitimate web stores. On these well-made scam stores, Armani fashion is offered for sale to the gullible users. To avoid being scammed and ripped off, you should pay very close attention to where you shop.

How do I recognize dubious Armani fake stores?

You can find the original Armani homepage here: www.armani.com/

Websites that carry the brand name Armani with an addition such as "Sale" or "Outlet" in the URL (e.g. www.armani-outlet.com) are fundamentally not authentic and are very likely to sell counterfeit products.

Also, avoid online stores where they notice the following:

Websites with these features put you at a high risk of being scammed.

Take advantage of our Checklist to recognize dubious online stores or find out about Armani security features at our Fake Check. 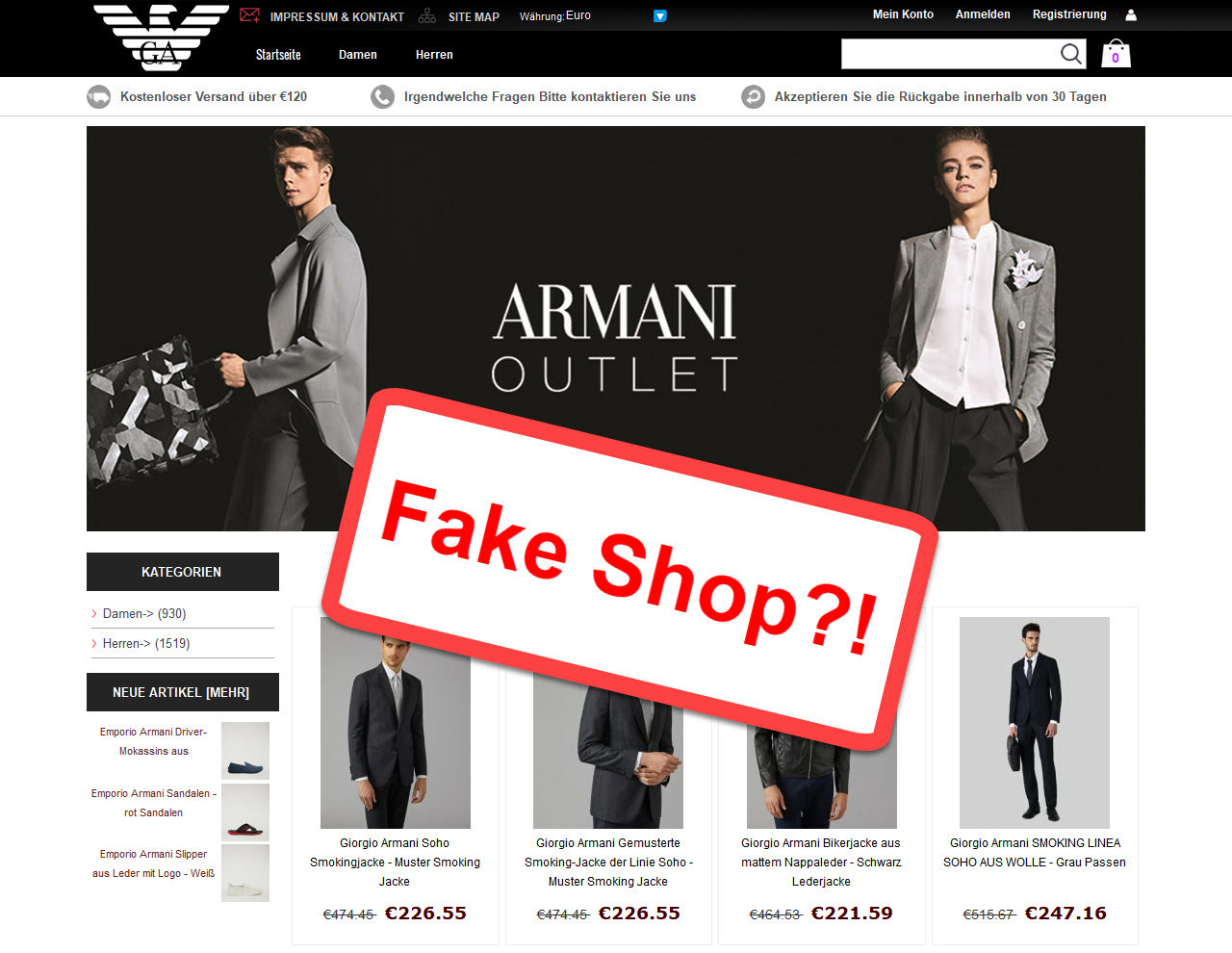 Legal notice
Orignalo.de is completely free of charge for you. This is important to us, because we want to educate as many people as possible about counterfeiting. Nevertheless, we also have to earn money, for example to pay our editors or servers. Therefore we publish e.g. advertisements, guest articles or set so called affiliate links. On this site we have especially in the section "Originalo purchase recommendation" so called affiliate links to trustworthy online stores. Other advertising-financed links are marked with a "*". Learn here more on the topic.

The published URLs are based on experience reports of other users. Originalo.de does not guarantee the topicality, correctness and completeness of the URLs and information provided. If you notice any errors, please contact us via our Contact form.